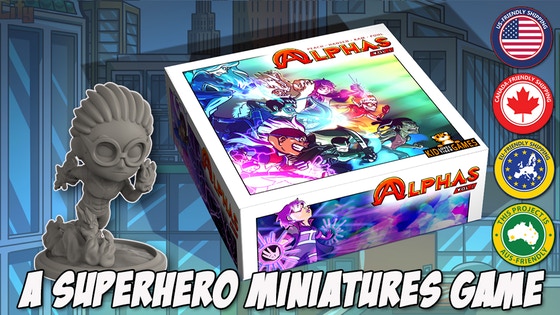 Latest Updates from Our Project:

There will be no list this month, no breakdowns of the scenarios, just a heartfelt thank you. As it will be 2021 soon, we have remained committed to updating you every month. Even though this month we took some time with our families, we were still improving. We will have more to show in January, but for now, we just wanted to express thank you.

2020 threw us for a loop and your kindness, patience and empathy went a long way to keeping us working, motivated and energized. Thank you all so much for keeping us going and we look forward to engaging in 2021 as you all have been the very best.

For the sake of Continuity, let us begin with the list!

So we have been having David and company test this, where the Villains include both Villain Henchmen Types in Volume 1 and a much more powerful Arc than the Skirmish version of here (seen below). On top of that, to the left you can see the Energy Cap for villains is higher, but split amongst all their people. You can see near the Arc Illustration, 4 Powerups. Each time a Player uses a Power Card (one off special cards of insane power), Arc gets a boost. Could be better statistics or it could be new powers!

On top of that, the track on the right shows Arc's progress in charging up to do something villainous (and spoiler related). But as she powers up with these harmonic devices, bad things happen to our heroes. Yes, we know of said spelling errors, these are being proofed now to drop on the final design. This was just a preview of what David was testing with.

Everything said at the end of the previous update stands timeline wise and we continue to work towards that. We thank you all for your patience and hope you are safe and able to have some sort of happy holiday season! :D

As we have been doing, let's run through the list!

We are moving forward with some steam now! Now let's get to the meat and potatoes of what's left.

One thing we know. We will not meet our internal goal of wrapping things up and getting this manufactured before the Chinese New Year. With the holidays, day jobs and what remains, it simply isn't possible and we want to be open about that.

Here is what we can say on our timeline. Throughout the remainder of the year, our goal is to wrap up our development on the new ruleset. We also want a pass over from you all on the rules and a developer play through. This is made a little harder as Chris's kids are in distance learning where they live, so recording during the week is harder.  Once the testing is done though, we should be able to rough out a timetable from the manufacturer. With that in mind, we will be looking at lining up the final timeline. As with everything, our mistakes and successes, we will be happy to share all of this as we work through it.

Let's start the week with the list from last month's update.


We haven't been able to have a large play session of the Story Scenario, but we are looking at having Chris and Ben put together a head to head match up this month showing the new rules. As always, if you for whatever reason are not receiving the updates through Kickstarter or, late backers are not getting them through Backerkit, just remember to check up at the end of each month for the Update! Without fail, we have not missed a month, so if you remember to check in at the end of the month, we will be here. If we get a head to head for next update, sound off with which characters you would be most excited to see!

I want to start the August Update with a breakdown from the development team of what needs work still. Now, some of the items will be much easier to check off the list than others. And some will require more proofing and editing than others.

So here is an overview of what is being worked on in some way shape or form, and needs to be finished next.

There are some minor things here and there, but this is the bulk of work the team is tackling. With Minnesota's COVID cases, we are monitoring when the team may be able to have said play for you all, as well as the final testing they want to do here on scenarios.

Thanks for taking time to catch up with us and stay tuned for the next update. Remember, we update every month!